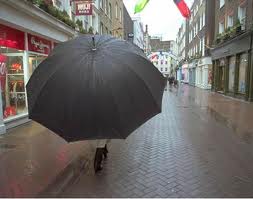 “What a beauty. It’s a top of the range model with enough room for three chicks“

After the well publicised ‘drought’ of the previous 18 months, the UK has recently been experiencing what can only be referred to as payback. Quicker than you can say “fix the leaks you profit-guarding water fascists” we’ve experienced the highest amount of rainfall recorded, since Noah had the foresight to build an ark and float around for a while. And that’s a fact.

During these last couple of months I have noticed a new phenomenon whilst frantically trying to shield myself from the inclement weather, wondering why my £5 pop-up umbrella isn’t wind-proof, and also seems to be porous. There seem to be many men, and it’s almost always men, who feel the need to purchase the largest umbrellas that they could find before they feel it’s safe enough for them to venture outside. I’ve seen parachutes smaller than these jumbrellas.

What I want to know is why? As many city-dwellers don’t drive, are these humongous umbrellas simply an extension of these guy’s masculinity? Subconsciously, do they feel that it is somehow unmanly to make use of an average-sized umbrella? I think the answer to these questions is ‘yes’; these behemoths are in fact simply penis extensions for city men who would love to own a sports car, but never get the chance to drive one.

You may think that I am being unfair but I can tell you, being over 6ft, I’ve lost count of the amount of times I’ve walked over London Bridge in the rain and felt like I’m passing through the rollers of rather spiky car wash, as the massive umbrellas passing by me are inconsiderately being held at my head height. At those times I distinctly recall thinking that those men must have very small penises indeed. It was the only thing that kept me from screaming before I popped out the other side, suitably ruffled… but sporting a rather nice sheen.

So what is the solution? What I propose is an umbrella tax, similar to the tax on unnecessarily large vehicles that we have in the UK. If you insist on proudly sheltering yourself from the elements with your ‘penis’, for all the world to see, then fine, go for it. We’ll pretend not to mind as we get soaked by the cascade of water running off the edge on to our feet. Honestly, they are so large that they need guttering and downpipes. Keep them, just so long as you pay the price.

Like the selfish oafs who choose to drive off-road cars on city roads, big umbrella lovers should also pay a premium for obstructing other’s head space. In the UK’s climate, it can only help in our times of austerity TM. I propose a hefty 50% tax on large umbrellas. It’s the only way for them to give something back.

Who’s with me on this? Start an online petition in the comments below. And if you’re from a warm climate, I’ll give you reciprocal backing for a tax on those ridiculous beer can-holding caps with straws.