The ski jump at Lillehammer

Once again I embarked on a road trip with my travelling companion Big Boy; this time in Norway, starting in Oslo. Of course, the first thing to ensure when travelling, is that you actually take a flight that lands in your destination city. Not to take a budget airline flight that lands somewhere amongst a thicket of trees, somewhere near a reindeer farm… 1.75 hours away from Oslo. Torp airport is so quiet that the ‘express’ bus to Oslo actually waits for the Ryanair flight to land before setting off! END_OF_DOCUMENT_TOKEN_TO_BE_REPLACED

The Roman ruins at Volubilis

The second leg of our tour of Morocco continued with a gruelling seven hour taxi ride from the south up to Meknes. In Morocco they have two types of taxis. Petit taxis for the cities and grand taxis for longer journeys. Most of these big taxis are clapped-out old Mercedes that they seem to believe can seat seven in comfort. They can’t. Even a trip with just five of us was tough. Nothing of the luxury from the prime of these Mercedes’ lifetime remains. But at least the roads were half decent most of the way.

Meknes was one of the most pleasant towns in which we stayed, being smaller and more low-key (i.e. less hassle) than the more traditional tourist stops such as Marrakech. We were lucky that the nearest mosque to our riad had a call to prayer sang beautifully in the early morning. It certainly made a difference to the awful racket most of the others make. END_OF_DOCUMENT_TOKEN_TO_BE_REPLACED 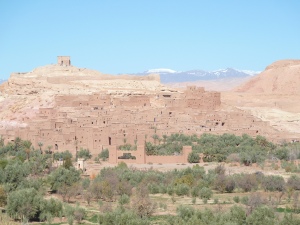 So once again I embarked on a trip with Big Boy, after our successful tour of Iceland in the summer, this time heading to Morocco. On the plane flying over, Big Boy spent hours perusing the Lonely Planet guide-book, making seemingly fastidious notes on potential sights and travel arrangements. Upon arrival it transpired that he had spent all of that time researching what food he would like to try and which restaurants to visit. Priorities now set, we checked in to our Riad after being ripped off by some little street urchins who carted our bags along the narrow alleyways, deep in Marrakech’s medina.

We bumped into a couple of Kiwis on the first night who had paid for some henna tattoos in the souk. They had quickly realised that the lady had tattooed their names on their arms in Arabic, as all of the traders who saw them took great pleasure in shouting out their names as they walked past. As if it wasn’t hard enough to avoid the attentions of persistent hawkers… END_OF_DOCUMENT_TOKEN_TO_BE_REPLACED

So feeling jetlagged and the extreme heat – it reached 102F – the trip took on a surreal impression as my fellow campmate and I spent 5 hours getting to know each other, stopping only for carbohydrates and saturated fat at a Mexican restaurant. Reno itself is a poor man’s Las Vegas, despite’s it’s claim to have the ‘loosest slots in the USA’. Whatever that means. END_OF_DOCUMENT_TOKEN_TO_BE_REPLACED 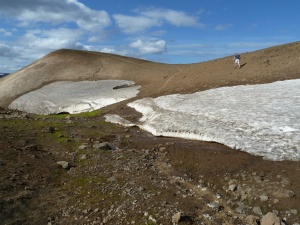 Krafla volcano with Big Boy charging ahead. Again. He waits for no man!

The final leg of our tour of Iceland saw my travelling companion Big Boy change his fascination with Icelandic horses to an interest in the local sheep. “They have multi-coloured sheep. Black and white.” Well, that’s not exactly multi-coloured, and you only mentioned that when you saw a black sheep didn’t you? Sheep racist.

First stop of the day was the stunning Godafoss waterfall in Fossholl, conveniently located 10 minutes from the road, meaning that we could continue on our way to the beautiful Lake Myvatn without much delay. The lake itself has lush vegetation on one side and largely barren volcanic rock on the other. Weird. The attractive side also has the impressive sites of the Skutustadir pseudo-craters (looking very crater-like to me, but what do I know), towering lava rock formations at Dimmuborgir, and Hverfjall volcano, which we climbed up and into, whilst stumbling over loose rocks and gravel. END_OF_DOCUMENT_TOKEN_TO_BE_REPLACED 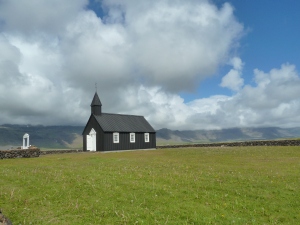 The satanist church at Budir… Just kidding, it was Christian

Disaster! We had just been informed that another volcanic eruption had caused a massive glacier to float down from a mountain and take out a bridge in the south of Iceland, meaning that the ring road around the island would be closed for 3 weeks, thereby scuppering our planned circular route and meaning that we would have to double back at roughly halfway around. Then the starter motor didn’t work on our hire car…

After a lengthy delay a replacement car had arrived, so Big Boy and I set off once again, chuckling at having found out that the word for ‘bye’ in Icelandic is ‘bless’. Ahh, how sweet! END_OF_DOCUMENT_TOKEN_TO_BE_REPLACED

Another year, another tour, this time to the land of fire and ice, accompanied by a close friend of a whole 6 months, who I have socialised with only around 10 times. But he was up for the adventure, so the plans were made. He will go by the name of Big Boy to preserve his anonymity and with good reason too.

As we went through airport security we encountered flashy new automated scanners. I whizzed through effortlessly, but turned around to see Big Boy looking puzzled. He saw the notice that read “Face down” and wrongly assumed that he should place his face over the scanner, rather than holding his passport there! I just wish more people were there to witness such hilarity. Alas, that was the end of the good humour as we discovered a long flight delay was in store.

When we finally landed in Reykjavik we experienced a disorientating lack of darkness, even at 4am. It just seemed like dusk as we headed through the barren volcanic landscape to the city. END_OF_DOCUMENT_TOKEN_TO_BE_REPLACED