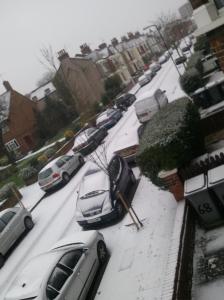 Stay in the tracks, it’s the only way to make it through!

Drama unfolded over the past week as a rarely seen natural phenomenon occurred over much of the British Isles. It was so cold that rain actually froze and fell to earth in flakes of snow; something that has not been seen since way back. Last year sometime. But we can’t say we weren’t warned.

Weather forecasters informed us of impending doom. We should only travel “if absolutely necessary”. As a result, countless people decided against partaking in their evening hobby of driving around aimlessly in circles. It was just too dangerous.

Then the heavens opened and the snow cometh. Parts of the west experienced blizzards with gusts up to 5mph, resulting in drifts capable of obscuring predatory polar bears, quite possibly looking for new territory due to the melting ice cap, attracted by the ‘arctic’ conditions. Understandably, faced with such dangers, schools closed. Just in case.

London received a fair dusting, resulting in travel chaos. Commuters were forced to either  work from home or face delays of up to 10 minutes. How utterly inconvenient for such busy people.

As one commuter commented:

“I’m a really important person, with a job in the City. I have better things to do than wait for things. I normally pay people to do that for me. By the time I get into the office, I’ll barely have time to check Facebook.”

By Sunday, parts of the capital had been blanketed with several centimetres more snow, bringing the depth to just over ankle height. The dwarf community were advised to stay indoors. An albino couple were subjected to an unpleasant exorcism by a local priest who thought he was witnessing disembodied Timberland jackets wandering through Clapham.

In Mayfair, police were searching for a missing Chihuahua that was sent for help after it’s owner lodged her Porsche Cayenne on a large snowman, unaware of how to select 4×4 transmission. After surveying the situation, her Ugg boots soaked up moisture from the snow and froze, thereby forcing her motionless, unable to life her heavy feet.

Thankfully, most people heeded advice and stayed indoors. In the first extreme weather event since the ‘drought’ of last summer that caused office workers concerns over ‘rehydration’, the authorities eventually managed to take control of the situation, ensuring casualties were low.

Thank God we made it through. The British are such a stoic bunch. Well done each and every one of you, and thanks be to the authorities and media, without whom we just wouldn’t have known how to cope.

Anyone want to buy a freeze-packed Chihuahua?

11 thoughts on “White Stuff Falls From The Sky”