Last week saw the rather amusing consequence of a poorly run company, that fails to evolve in an ever-changing market, fall into the hands of administrators who, whilst sharpening their hatchets to make the necessary job cuts, failed to notice that disgruntled employees had vented their fury via the medium of Twitter.

Of course, I am referring to the music and games retailer HMV; a company that in its wisdom presumably decided that digital downloads were a passing fad and that large high street stores made good business sense. They did well to last as long as 2013.

The tweets that quickly went viral and were picked up by the media can be seen on the left. They were of course deleted once management became aware of the bad publicity. But the damage was already done.

Much more funny than these tweets is something that I stumbled upon recently. END_OF_DOCUMENT_TOKEN_TO_BE_REPLACED

Stay in the tracks, it’s the only way to make it through!

Drama unfolded over the past week as a rarely seen natural phenomenon occurred over much of the British Isles. It was so cold that rain actually froze and fell to earth in flakes of snow; something that has not been seen since way back. Last year sometime. But we can’t say we weren’t warned.

Weather forecasters informed us of impending doom. We should only travel “if absolutely necessary”. As a result, countless people decided against partaking in their evening hobby of driving around aimlessly in circles. It was just too dangerous.

Then the heavens opened and the snow cometh. Parts of the west experienced blizzards with gusts up to 5mph, resulting in drifts capable of obscuring predatory polar bears, quite possibly looking for new territory due to the melting ice cap, attracted by the ‘arctic’ conditions. Understandably, faced with such dangers, schools closed. Just in case. END_OF_DOCUMENT_TOKEN_TO_BE_REPLACED 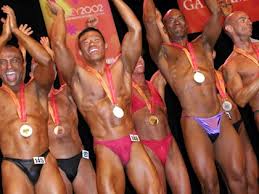 The official kit for the rugby caused some controversy

For those of you who may have missed it, London has made a determined bid to keep the Olympic legacy alive, by applying to host the 2018 Gay Games. Yes, this actually exists, I kid you not. The next ‘event’ will be held next year in Cleveland. And they actually think that there will be enough spectator interest to use some of the Olympic venues.

So what does the Gay Games actually involve? Perhaps games of ‘chase me’ or Twister? Or touch rugby? Well no, not those it seems. Putting aside silly stereotypes, it has a full array of sports such as cycling, football and golf. But also slightly unusual events such as rodeo and bodybuilding, as well as ‘Dancesport’, which apparently is competitive ballroom dancing. Well, if they have golf… END_OF_DOCUMENT_TOKEN_TO_BE_REPLACED

Looking back to my formative years, it’s fair to say that I’ve had a few crap jobs in my time. So it feels right to share my hideous experiences. One that instantly springs to mind was when I left university and, in my desperation to find work, I took a position as a vacuum cleaner salesman… Commission only.

This was not any old vacuum cleaner, oh no. It was a Filter Queen. Despite having a name that makes it sound like an overly camp man who insists on only drinking percolated coffee, it was actually a very good product. And it still exists. Quoted from the website (formatted to 1990s style 4:3 screen ratio):

The future of clean is now. The FilterQueen® Indoor Air Quality System uses its proven technology to create a cleaner, healthier home environment that is protected from harmful pollutants such as dust mites, allergens, viruses, mold spores and bacteria. END_OF_DOCUMENT_TOKEN_TO_BE_REPLACED

Those of you who are unaware of what Siri is, then allow me to enlighten you. Fashion victims such as myself who have spent a disproportionate amount of money to acquire the latest iPhone, instead of opting for an alternative cheaper model that works just as well, if not better, don’t want to be told this. It’s made by Apple so it has to be the best.

So you can imagine our joy at discovering the one feature that surely must be the stand out technology; something that could quite possibly make our lives complete. Yes, if you push and hold the big round button on an iPhone… wait for it… It talks!

Siri doesn’t just waffle nonsense, like Twiki from the old Buck Rogers movies. No, Siri actually asks: ‘What can I help you with?’ This got me thinking. END_OF_DOCUMENT_TOKEN_TO_BE_REPLACED

The start of the 400m hurdles from ‘our’ seats

Regular readers will be aware of my recent delight at having obtained a ticket for the Olympic athletics this week. My regular travel buddy Big Boy saw fit to offer me the much sought after ticket once his first choice declined his offer… And his second choice failed to come back to him. I guess that makes me the bronze choice?

This wasn’t the first Olympic event for either of us. I had attended four, so I was conscious that it was likely that we could ‘upgrade’: locate some empty seats and pretend that they were ours. Until the ticket holders turned up END_OF_DOCUMENT_TOKEN_TO_BE_REPLACED

Shock at the Olympic torch relay in London, as an innocent man’s head is set alight in an unprovoked attack

I’ve already made my feelings clear about what I feel is the over-commercialisation and money-grabbing attitude of the London 2012™ Olympics in a previous post. From the ridiculous complicated ticketing process, to the draconian legislation relating to the use of certain key words and phrases for marketing purposes, including the removal of company logos from toilets! It just didn’t seem like the true Olympic spirit.

It’s not that I wasn’t looking forward to the sporting spectacle. There’s nothing I appreciate more than the sight of intensely toned athletes, exerting every last ounce of energy, END_OF_DOCUMENT_TOKEN_TO_BE_REPLACED