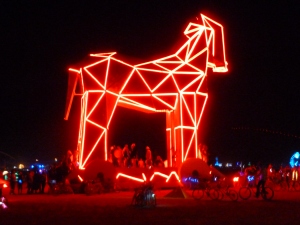 So feeling jetlagged and the extreme heat – it reached 102F – the trip took on a surreal impression as my fellow campmate and I spent 5 hours getting to know each other, stopping only for carbohydrates and saturated fat at a Mexican restaurant. Reno itself is a poor man’s Las Vegas, despite’s it’s claim to have the ‘loosest slots in the USA’. Whatever that means. But I’m sure that the innuendo in the phrase is missed by the locals. It did make us laugh though! Even funnier was the local Christian radio station, which interviewed a musician who recalled the time he toured England and Wales, coming out with this gem of a quote:

The thing about Wales is that 99% know nothing about Jesus and what he has done for them.

We stayed in the Peppermill resort which strangely had a multitude of religious-themed paintings in the wing where our room was. A painting of Jesus Christ overlooked our beds. Just what any gambler would want to 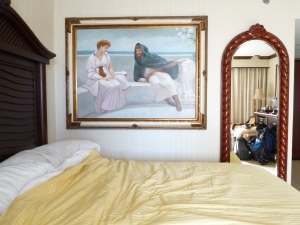 A reassuring bedside picture in a Peppermill room

wake up to after a night of heavy losses… A second odd thing that we noticed, was a man in the casino wearing blue plastic gloves, who carried his money in a zip-lock plastic bag. Because you can never use too much plastic. He even wrapped a napkin around his glass.

The Peppermill was also our first experience of struggling to make ourselves understood. I asked for butter at breakfast. “Pasta?” came the reply. No – butter… “pasta…” They don’t even sound the same… but-ter… “Pasta”… B-U-T-T-E-R. “Oh, budder!” I stand corrected. Sorry about that. Other people also thought I’d said my name was Sewer, rather than Stewart. That’s not even a name, damn it!

After a night spent dribbling into our beers at the Edge nightclub, but unfortunately failing to experience loose slots, we began the trauma of the final leg to Black Rock City, in the dust of a massive dry lake bed. A mere 5 hours later and we were inside, fed up with having been cooped up in a car for so long and having to endure the weirdness of the temporary Burning Man radio station.

We just had enough time to set up our tents before dark. Unfortunately, the tent that I had bought and placed carefully in the boot of the car had somehow disappeared. How is that even possible? “Well, I did re-pack the car last night, but I did make sure that everything was put back in” said my travel buddy. Oh…

So after a long time spent introducing myself to my new Quixotes campmates and then asking if they had a spare tent, we tried and failed to pitch two tents which were either unsuitable or had broken parts, before finally sourcing a new tent, kindly donated by our leader, Monty. What a star!

We spent the first night with two new friends cycling around the ‘city’, dodging the custom-made vehicles whilst taking in lungfuls of dust as we reached the perimeter fence in the deep playa, stopping off at various illuminated sculptures that were randomly dotted around.

We marvelled at the workmanship on a giant trojan horse and huge temple, both made out of wood. In the temple people wrote dedications on the walls; to those who they wished could be there to share the experience, but couldn’t be for whatever reason. There was an ethereal tranquility accentuated by regular automated chimes. What appeared to be guy ropes actually turned out to be the strings of a giant harp!

After a 50 minute cycle back to camp, we felt obliged to visit a few local theme camps for some liquid refreshment. Of particular note was Vamp Camp. We had the honour of meeting Vamp himself who claimed to have been to 20 ‘burns’. It showed. He was a legend in his own mind, so good luck to him. Alongside him at the bar was a delightful young hippy lady who told me her name was Colours. I so nearly asked “Which ones?” It was at this point that one of my new Black Rock buddies said that my playa name should be… Cynic. Okay, okay, it’s been a long day, I’ll get into it tomorrow! Colours was also the first person (of three during the week) to criticise me for not dressing alternatively. Silly me, I thought Burning Man was all about personal choice. 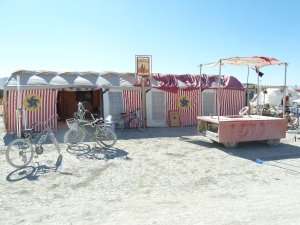 The Flashman Arms in all its glory

The next day gave me a chance to meet the other 30 or so members of our camp as we put the finishing touches to our British pub-themed venue, complete with pictures of the royal family and a mock fireplace… but without the smell of vomit and a crazy local who keeps asking why you’re looking at him ‘funny’. We only cherry-picked the best bits naturally.

On the opening night I took at turn as DJ, using only an iPod. I had decided to let the device play random tracks when I noticed that a group of people were suddenly dancing! Damn, I had to make sure it didn’t suddenly play Slipknot! Unfortunately, the jumpy nature of track selection by iPod ensured that complaints were soon forthcoming and the dancefloor was cleared. At least I tried…

Over the course of the week I covered several miles as I took in the sights and found where I was most comfortable. In the shade. Any shade going. Man it was so hot! I don’t know how the nudists managed to survive without suffering serious burns to their private (or in this case public) parts. I particularly enjoyed the Centre Camp which was had sofas and was the venue for regular talks, comedy and unusual musicians, including a guy named Cello Joe, who sang, rapped and beatboxed whilst playing the cello. It was here that someone asked me the time. Ten to two. “82?” Huh? That’s not even a viable possibility!

Surprisingly, I managed to miss such delights as dildo fencing (presumably as in the jousting type, rather than securing perimeters, but who knows?) and bondage workshops. Not really my thing. I did meet a girl in our bar who said that she was learning to whip. Thought that was quite an easy skill… She asked me if I had a pair of scissors for her to customise my t-shirt. I thought it best not to give her sharp implements. By mid-week my playa name had been amended to Cynical Unicorn. Not sure how, but you’re not allowed to change your own name. That’s the rule.

Burning Man was also the first place where a gay man touched my bare butt cheeks. Call me an exhibitionist if you will, and there is no better place to be one, but I thought it was an amusing idea to have a tattoo transfer on my butt and there are pictures to prove it, which must never see the light of day. These things happen when the drink is free. I also experienced an improvised leg jenga, lying on a trampoline with seven others. Dressed in a tiger costume. Don’t ask.

Some of the camps on the main esplanade were truly amazing, including a Mad Max-style dueling dome, in which two combatants on harnesses pummelled each other with padded sticks. There were also some massive sound systems and quality DJs. Even better than me with my iPod…

Our bar, The Flashman Arms, put on a few different events, such as a tea dance (very civilised), Vietnamese iced coffee giveaways (still very civilised) and cabaret nights, featuring singers and comedians (less civilised, but entertaining). We had a slight problem with our taps which meant that some of the beer was 90% froth, but who can complain when it’s free? Talking about frothy liquid, one of my campmates reached into his tent one day for a beer, only to recoil in horror as he realised that he had just taken a swig from his emergency pee bottle…

So did the Cynical Unicorn find a playa girlfriend? Well, not exactly. I had a bit of a smooch with a girl in a kissing booth who asked me to hang around. But then she turned nasty when I said that I had camp cooking duties to attend to. Fair enough really, it was a lame excuse, but I didn’t want to let my campmates down. Then one night things were going well with another girl when she said that she had to check in with her partner… Business partner? No, lover. Apparently, it was okay for her to kiss me, but not to go back with me. But the ‘partner’ seemed less than impressed that she was hanging out with me; it was probably made worse as I was wearing a monkey costume. He clearly wasn’t pleased about her monkey business. The situation came to a head when we were all supposed to head for the toilets together. So I was supposed to make small talk with him at the urinal? That was just too weird! I left them to it.

After hitting a wall of exhaustion on the Friday, it was hardly surprising that the last day was a struggle. After throwing up some dust and monkey fur, I was of little help with the camp takedown for the first few hours, though I did chip in later in the day. The final day was tough to endure, although the temple burn in the evening made it worthwhile. There was no noise, no lights, just thousands of people staring solemnly in silence as the massive structure burnt to the ground, in contrast to the burning of the man the night before which was an upbeat affair. 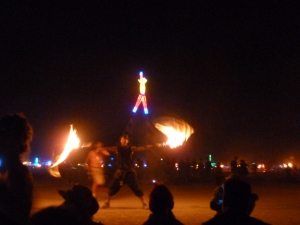 A week at Burning Man is one hell of an experience. Don’t go there expecting it to be totally amazing with no low points. It will be a rollercoaster of emotions; for every positive experience there will undoubtedly be challenges with the heat, dust and sleep deprivation. You will see wrinkly, nude old men. No-one needs to see that. And the queues to enter and leave are just ridiculous! I have no idea how it can take so long when I’ve been to larger festivals without such trouble. But the sense of community and giving spirit win out. Burning Man fosters a positive vibe that ensures that everyone is welcome, regardless of their own predilections. It really is an all out assault on the senses.

Will I return one day? Quite possibly, but only if I can hire an RV with a few other ‘burners’. A little comfort would make a massive difference and I think that the benefit of this year’s experience will ensure that I have an even better burn, second time around.