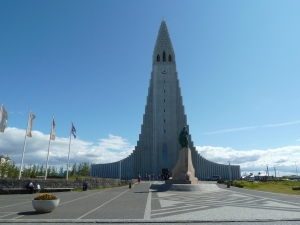 Another year, another tour, this time to the land of fire and ice, accompanied by a close friend of a whole 6 months, who I have socialised with only around 10 times. But he was up for the adventure, so the plans were made. He will go by the name of Big Boy to preserve his anonymity and with good reason too.

As we went through airport security we encountered flashy new automated scanners. I whizzed through effortlessly, but turned around to see Big Boy looking puzzled. He saw the notice that read “Face down” and wrongly assumed that he should place his face over the scanner, rather than holding his passport there! I just wish more people were there to witness such hilarity. Alas, that was the end of the good humour as we discovered a long flight delay was in store.

When we finally landed in Reykjavik we experienced a disorientating lack of darkness, even at 4am. It just seemed like dusk as we headed through the barren volcanic landscape to the city. That is as dark as it gets in mid-summer. Having missed the intended Friday night, we rose early by Reykjavik standards, not helped by Big Boy’s reminder alarms going off three times before our wake up alarm. The first one was for him to ‘take the rubbish out’ and the second was for him to ‘cut hair’. He is bald. I didn’t ask about the third as I was thinking of ways to kill him and make it look like a horrible accident involving a pack of angry puffins. 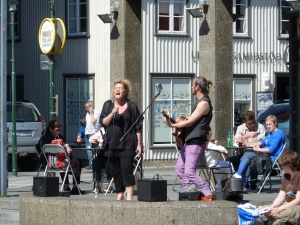 There were few people around at 11am, only the local drunks. Whether they had not gone to bed or just started early was hard to ascertain, but they were not a pretty sight. It seems that the Reykjavik morning starts at midday at the weekend. Quite right too. We took advantage of the strong sunshine to see the parliament building in the pleasant square, walk along the seafront, past Harpa, the bizarre looking new concert hall, walk along the main shopping street and see Hallgrímskirkja – the magnificent church that took 40 years to build. And there concluded the city highlights… Just as well, since I had caught the sun and my face was as red as the faces of the alcoholics who we had seen earlier.

Having enjoyed the relaxing ambience of daytime Reykjavik, we eagerly went out later for a meal and to take in some of the ‘crazy’ nightlife that we had been promised. Just what this actually meant, we couldn’t be sure of , but we knew that we wanted t see it. Well, it turns out that ‘crazy’ roughly translates as ‘busy’, as it seemed quite tame to us. But I guess that we may find it different when we return at the end of our trip.

Most notable was the unusual fashion sense that Ice people have. They really take geek chic and run with it, some of them looking like they got dressed in the dark, with mismatched bright colours and glasses that are too big for their faces. But it does somehow work with their reserved demeanour. All reserved that is except the inebriated strongman who insisted of arm wrestling both of us and anyone else who was within range, thumping the table and shouting “COME ON!” with worrying aggression. He out big boyed Big Boy. How very dare he. 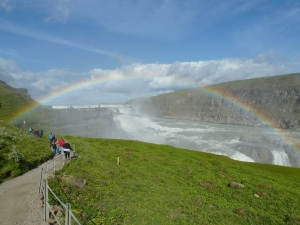 Rainbow at Gulfoss waterfall. No pot of gold was found.

The next day we took the keys of our hire car and headed out on our road trip, taking in the Pingvellir national park, where the Eurasian and American tectonic plates meet (or ‘teutonic’ plates as Big Boy called them) and where ancient Ice people used to meet to settle disputes and hold networking conferences, plus whaling expos. Probably. We also took in the stunning sight of the Gullfoss waterfall, just in time for a rainbow to arc across the raging torrent. At this point it just felt so perfect that I nearly held Big Boy’s hand…

The last stop of the day was at Geysir, which just so happens to be where there are several geysers that erupt with jets of stream at varying intervals, from a few minutes to a few decades and more. It was our first experience of the unpleasant sulphur that accompanies most volcanic sites, smelling like rotten eggs. On the way back I thought that we should take a shortcut. Unfortunately, the road became an unpaved, bumpy, gravelly nightmare that caused Big Boy to panic at the sight of oncoming traffic or corners or hills. Or sheep. But it did give us the chance to view the barren interior of Iceland and marvel at the bleakness of it all. “My arse is taking a pounding” said Big Boy. Well, surely, you must be used to that from your boarding school days?

After a seemingly endless off-road excursion, we finally made it back to proper roads and eventually pulled in to our first stop at Borgarnes, an unremarkable seaside town opposite impressive mountain scenery. There were only two restaurants in ‘town’ and the one we chose serve horse steak. We passed on that speciality. Unfortunately out hotel had sulphur flavoured water coming out the taps. So after washing my face and swallowing back a little bit of vomit, I called it a night, hoping to get to sleep before Big Boy’s snoring. It had been a good first day…

6 thoughts on “Strongmen and Geek Chic”