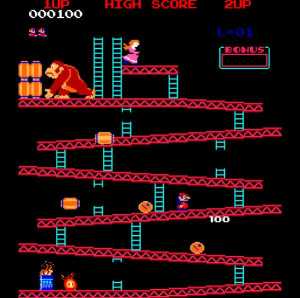 I realise that using ‘donkey’, ‘long’ and ‘kong’ in the post title may result in dubious search traffic looking for bestiality sites. Especially now that I have mentioned ‘bestiality’ in the first sentence. Oops, did it again. But this article isn’t about longing for donkeys as such. God, where am I going with this…

I am in fact referring to the retro computer game, first played in the days when you did actually need a PC to play games, before the age of consoles. But this isn’t a nerdy piece bestowing the virtues of an old computer game. It is actually about the days of yesteryear, when a little Stewie (a mere 5’11) was still living with his parents and going to school, with a mind obsessed with football and cars.

The 1980s were a time when life was simpler and fun. Ignoring recession, mass strikes, a hurricane, only four channels of TV and no internet, of course. But as a child, such negativity was soon brushed off. A quick run home from school (it had to be fast to out run Psycho Dave, the class bully) and I galloped upstairs, slipped in the cassette and sat back to wait for the game to load. A mere ten minutes later and the ‘Play’ icon was flashing on the computer screen and, before I knew it, five hours has passed.

And let’s not forget what exactly a home computer was in those days. My first one was an Acorn Electron. You have probably never heard of one before. Even if you are over 30. No-one knew of their existence in the 1980s either. My parents bought the wrong computer.

In addition to having a name that sounds like a physics experiment designed to alleviate oak tree deforestation, it was ‘powered’ by a mere 32K of memory. So it was less like a computer and more like a calculator on steroids, with clunky block graphics and strange bugs that made passing some levels an impossibility, no matter how many hours I spent, face grimaced in equal concentration and frustration.

Such bugs in programming also appeared out of the blue when, deep in football gameplay and desperate to beat my friend, his computer-controlled goalkeeper suddenly came charging out of goal, running up the pitch like an animated Forrest Gump, straight past my player and off screen, leaving me with an open goal. You just never knew when such an anomaly was going to happen but we accepted the unpredictability. What choice did we have?

Childhood will always be remembered fondly by each generation. As a child we recoiled in embarrassment when our dads told us how spoilt we were. They used to make their own fun by building go-karts out of old crates and drawing boobies on an Etch-a-Sketch.

Our grandparents were even more amazed at the luxuries afforded the youngsters. They made do with weekly wireless broadcasts and playing with rats in air raid shelters. Presumably this rhetoric goes back through the generations to the lucky young cavemen who were playing with their new fangled wheeled contraptions – their Neanderthal elders never had such extravagance as wheels.

The current retro gaming nostalgia amongst 30-something men signifies a yearning for a youth lost and to escape from the responsibilities of today. Sepia memories of happy childhoods are re-created by getting lost in the simple pleasures of Out Run and Donkey Kong. For a brief moment, you are that 12-year-old child again. You had no bills to pay then; life was uncomplicated and stress-free.

8 thoughts on “Long For Donkey Kong”