So old, he's been around since Jesus was a boy

I left Galle on a local bus, after having politely declined the offer of a long distance tuktuk ride to my next stop at Tissamaharama (Driver: “It’s only six hours by tuktuk”!). Even though I had to take two roughed-up local buses, it would still be more comfortable and faster than a bloody tuktuk! I say comfortable, but that’s misleading, as there was no air conditioning and the driver was clearly crazy; seemingly surprised when cows failed to move out of the way, causing him to brake sharply. On top of this, the bus soon started to fill up, meaning that I was forced to sit with my legs across my luggage, folding them into numerous yoga positions whilst attempting to meditate myself to Tissamaharama. Unfortunately a local weirdo sat next to me, intently studying me from a few inches, touching my mosquito bites and trying to communicate through the medium of pointing. Like that will work.

Tissamaharama is a pleasant small town on the edge of the Yala National Park and alongside a massive man-made lake. I wasted no time on arrival in hiring a tuktuk to take me to the ancient jungle temple of Sithulpawwa, along what seems to be an endless pot-holled dirt track. En route we saw a couple of smaller temples, one alongside a cave where an old man lives. He invited me to look around the two-roomed dwelling. It was cool and dark, even though there a natural shaft that let the light in. I asked him how long he had lived there. “2200 years.” Really?! “Yes.” So you are 2200 years old? “Yes” he said adamantly. Well you certainly look good for your age.

Later we finally made it to Sithulpawwa, which juts out of the jungle some 400 feet high. It offers stunning views of Yala, yet it’s surprisingly overlooked by most tourists. It was here that I met a lookalike of the UK businessman/celebrity/complete knobhead Peter Stringfellow. He was actually rather cordial and even posed for a photograph. 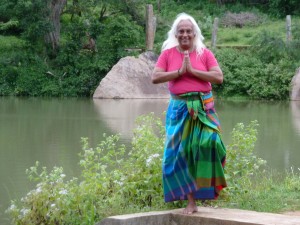 Peter Stringfellow loves to spend the winter in Sri Lanka

Next we made our way up another long dirt track and it was my second magical mystery tour of this trip (after the first in Delhi), as my tuktuk driver kept stopping to ask for directions to Kataragama, Sri Lanka’s version of Hampi in India. The driver took great delight in sliding the tuktuk around corners, rally cross style. And so did I. Kataragama’s old town (sacred precinct) is spread over 1km or so and is home to numerous temples adorned with multi-coloured lights which give a relaxing ambience when it’s dark. Many of the Buddhist pilgrims sit crossed-legged, chanting their prayers repeatedly. I saw a group of people who appeared to be praying to a sacred tree. Whatever floats your boat.

The next day I arose before dawn to head into Yala on a jeep safari. Everyone hopes to see a leopard, but your luck needs to be in if you are to glimpse more than just a long distance view through trees. And that’s exactly what our jeep had early in the day. Hardly what we wanted, but better than nothing. Initially the drivers of the countless jeeps took to racing each other, jostling for the best positions. The first leopard sighting resulted in a bumper-to-bumper traffic jam; it was truly farcical!

We saw a few lone elephants, boars, deer, iguana and peacocks, but still no decent sighting of a leopard… But then, we rounded a corner and there on the dirt track was a majestic leopard, chilling 10 metres in front of us! We had at least 5 minutes of uninterrupted leopard watching before the cavalry arrived and all the drivers tried to edge just that little bit closer… bothering the beast into a swift undergrowth exit. Towards the end of the tour, our driver tried to kill us, by reversing to within a few metres of a male elephant that was feeding in the bush, effectively boxing it in! It stopped eating and spun around poised to charge us. Time for a quick retreat, hearts racing. Idiot driver.

The next day I took a local bus to the picturesque mountain village of Ella. The incessant drizzle wasn’t enough to deter me from attempting a climb to Ella Rock, the prime reason for visiting the location. However, they clearly can’t be bothered to signpost the walk, so I had to hire a local farmer to show me the way. At least it was someone to talk to! Even that cunning plan, didn’t work out as I had hoped, as he ditched me about a third of the way up, saying he had work to do. Thanks… So I stumbled and slipped in the mud until I reached to summit to witness the stunning view, just as the sun came out. Then I managed to go the long route down. Damn farmer guide man, you could have stayed.

Despite feeling tired after my exploits, on the insistence of a tuktuk driver, I visited an interesting temple just outside the village; different to most others that I’ve seem, in that it is actually more impressive inside than outside. Dowa Rajamaha Viharaya is a cave temple, ornately decorated with plenty of paintings on the walls and ceilings. An expected and welcome end to the day. And then it started raining again…

So here it is in its full-sized (okay, slightly blurred – I was excited!) glory, the evidence of my leopard spotting. Ain’t it a handsome creature?

5 thoughts on “A Leopard and a Caveman”