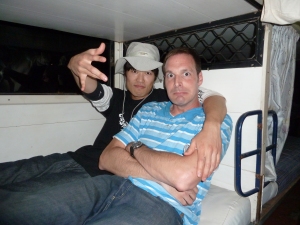 A little too friendly for my liking

“You don’t have a girlfriend?!” Not again. This is starting to irk me. “Ha ha this must be some kind of joke!” No, it’s not. “Do you not like girls?” Yes, I do. “But you are handsome.” So I keep hearing. “Ha ha. Why no girlfriend?” Ha Ha back. Okay, I’m tired of this now. Unfortunately I was a captive audience for the taxi driver taking me to the overnight bus travelling inland from Goa to Hampi.

I had a terrible sense of foreboding about this trip. Sure, I had booked what was called a ‘bed’, but this is India, so I was worried that there would be three of us stretched across two beds or some other hassle. The other passengers were a mix of tourists and locals, including a party of fourteen Koreans, one of whom had taken the bed next to mine. I say ‘next’ to mine, but there wasn’t so much a gap between us, as a ‘suggestion’ of a gap. His name was Woon and he was the same size as me, 6’4. Great, out of a party of Koreans, I have to share with the giant; one who is at least a foot taller than a normal Korean. The big freak. But he turned out to be a nice guy. The beds were about shoulder width and long enough to take my full length, if only I could have sawed my legs off at the knee. Plus I kept sliding into the wall when the driver braked hard (a regular occurrence) and there was a constant flow of air from an open window so it got cold. So cold. But at least a hypothermia-induced sleep is better than no sleep, right? Bizarrely, one of the other Koreans, a small middle-aged man, managed to get in a fight with an Indian man at the first stop, fists flying and tables toppling over everywhere. He received a nice little cut as a memento.

The hippy hangout of Hampi is built around the ancient temples of Vijayanagar and surrounded by huge and weirdly balanced boulders in every direction. The first ruins that I looked at were close to Hampi Bazaar and disappointingly suffered from neglect; litter, graffiti and an overpowering smell of urine in some areas. I questioned the World Heritage status at this point! Fortunately, the temples further away from town were fantastic, especially the well-preserved Lotus Temple and Elephant Stables. Many Indian tourists travel to Hampi for sightseeing and, when I was there, a Hindu festival. I think that some of them must be from areas with few tourists, as I was asked to pose for several photographs, both on my own, plus cuddling a new ‘friend’. And I’ve never shaken so many hands in my life. 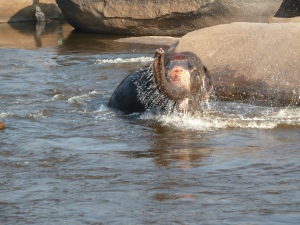 Don’t forget to wash behind the ears

There is a sacred elephant that lives in the main temple in town and touches the heads of pilgrims to bless them (after a donation of course). I say ‘touch’ but it’s more like a thump. No extra charge for concussion. Every morning we are invited to watch as the elephant walks down to the river and bathes, frolics and showers itself to its contentment. If you get too close you may also take a shower, fully clothed. It’s a tough life for the sacred nelly; an early rise followed by the application of ritual make-up (presumably applied by its keeper, unless it is truly talented), river bathing, then blessing more people than the Pope, whilst being force-fed bananas. There is also a real-life ‘miracle’ in the temple, an inverted shadow of the temple tourett. Or it might just be a carefully sculpted rock in a well-placed position to give the illusion…

A nearby hill is a great spot to watch the sunset. Unsurprisingly there is also a temple there and I was kinda forced into being blessed by a friendly shaman. He was badly crippled, so when he asked me to follow him into this cramped, tiny temple, I felt obliged to do so as he hobbled inward. No, I don’t want the red hindu paint on my forehead, I’m okay, honestly… Damn it! “Thanks, that’s lovely” I said as I moved off to find a good vantage point. Hampi is a meat-free, alcohol-free town. I’ve been gnawing on my own fingers just to get some meat, I’ve been so desperate. I realise that I could never turn vegetarian. There is very little nightlife and yet here I was on Christmas Eve. Time for an early night then.

A chilled-out second day in Hampi involved taking a basket boat along the river. Ooh, I saw a kingfisher! And that was as exciting as it got, although it was relaxing. When I told the riverboat man that I worked in advertising, he said “Oh, maybe you can help me?” Er, maybe. I will see what I can do.

Then it was another sleeper bus, this time to Bangalore. Another city, another hell hole. My express tour through the thick soup of the dawn smog failed to impress me. It’s an IT boom town apparently. Great. As I sat in the airport waiting for another Slow Air flight, I noticed that birds live there, even past check-in and security! At least there was only a 30 minute delay this time…

5 thoughts on “Sleep With A Giant, Shower With An Elephant”