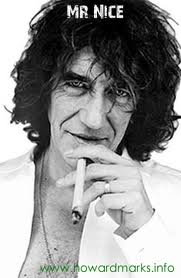 Do you know the best way to avoid being caught at customs searches? Lion shit. So says Howard Marks, the legendary Welsh don of dope smokers who used the moniker ‘Mr Nice’ in his smuggling days in the 1980s, when he was Britain’s most wanted fugitive. All you have to do apparently, is weigh up an ounce of a lion’s finest and wrap it neatly in a concealed part of your luggage. If you are caught, it diverts attention away from your real stash, hidden internally, and if you are searched by a sniffer dog, the poor mutt takes one sniff and runs for the hills to the bemusement of its trainer. It also freaks out police horses if you are planning a demonstration, as were commonplace for Marks in the Vietnam-era 1970s. Throw some of that and the horse flees with its rider hanging off fearing for his life. Nothing illegal about carry lion shit with you! And it’s easy to come by – Marks used to buy a sackful for £3 from Dudley Zoo.

An evening with Mr Nice at Greenwich Comedy Festival was always going to be an anecdote-filled night in which the dope smokers present would hang off every word of their anti-hero Howard Marks who, like a cool Uncle who’s been around the block more times than he can remember, has had a life barely imaginable to the rest of us, filled with excitement, scrapes with life’s undesirables and, perhaps surprisingly, extensive philosophising and soul-searching. Hell, seven years in prison will do that to man! But like he says, feel no sympathy for prisoners as they know the risks.

The evening consisted of over an hour of readings from Marks, which he enthusiastically recited (in between swigs of wine), obviously re-living the moments to our benefit. Sometimes he would digress from the script, like when he was discussing his work with MI6 and a helicopter spontaneously flew overhead (you couldn’t have planned it better!) and he remarked that he has to be careful what he says as they would be out to get him. The final part of the show was the questions and answers session. Occasionally he would be distracted by hecklers or pointless questions, only to put them in their place with dry wit or by playing stupid:

“What are you smoking now?”

“I’m not smoking anything now” (he’d already made his feelings known about the smoking ban!).

Overall, Howard Marks was erudite and sharp with his observations and those with an interest in or a curiosity of his errant lifestyle will not be left disappointed in an evening with Mr Nice, so long as you can ignore some of big mouth stoners who won’t shut up during question time!