Those of you who use the retailer Amazon (and that’s probably most of you), may have noticed the fairly recent trend of the friendly multi-national giant helpfully suggesting alternative products for us to buy. Because they care. Such a helpful bunch.

But you can surely imagine my surprise when I received the following unexplained suggestion: 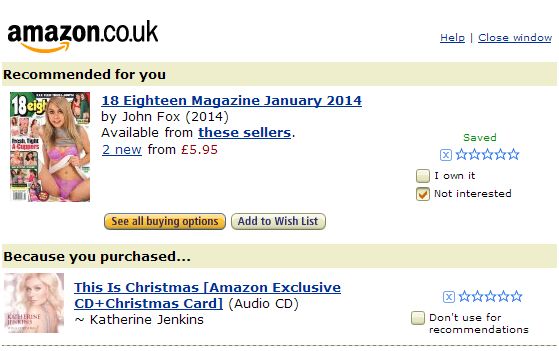 I tweeted the screenshot and Amazon customer services replied within minutes, unsurprisingly! “Sorry about that I’ll get it reported to the business team. You did the right thing checking the box. It shouldn’t happen again.”

Shouldn’t happen but will it happen again? Surely they should block all adult content from this kind of algorithm which surely isn’t up to scratch. Having said all of this, it did make me laugh. I notice that they don’t offer ‘used’ copies…