If you’ve arrived here via one of the many search engines out there, then I can only assume that you have an interest in an Islamist freedom fighting group based in the Philippines, as reported by Al Jazeera… Who doesn’t?

Okay, I know that’s not true. You actually have an interest in the more common definition of this acronym, don’t you? You naughty little boys. Of course you want to know about homemade fudge (Mother I’d Like Fudge). Well here’s something to get your juices flowing.

Once I stopped laughing, I clicked through to discover that an Islamist insurgent group has a rather unfortunate acronym in English. How could they not know about the more common definition – have they not seen American Pie?

Oh, they haven’t… You mean to tell me that an organisation that is demanding a separate Islamic state in their part of the Philippines, governed under Sharia law isn’t familiar with Western popular culture? Get outta here!

So, Murad Ebrahim, I suggest you change your group’s name to something more public relations friendly. Such as the Front for Liberation Under Fun Fanatics of Islam (FLUFFI). Yes. That would do it.

And replace their current leader:

With this more lovable symbol of peace: 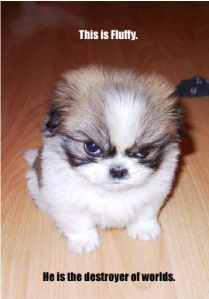