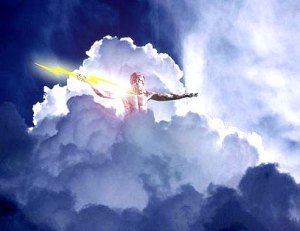 Stop bothering me Jack, or else this lightening bolt’s for your butt!

A WordPress member and self-proclaimed messenger of God known as Apostle Jack recently reappeared on the forum for a second time, posting several topics designed to stimulate debate and promote his misguided religious cause.

I tried to resist temptation, in the true biblical sense, but this fool deserved to be mocked for spamming the forum to spread his twisted beliefs and delusions of grandeur.

What follows are four separate topics, each neatly headed by Apostle Jack himself.

If you had to,would you change your opinion about your faith.I have witness the turn around and conversion of many people,some of whom said they never would.Some will never know until they meet the bear in the alley.Some will hear about it and never take that route…..and some refuse to be told.And then there is.. THE WISE:…those that go around what others have to go through and suffer.

Hi Jack, I’m back. I chose to abort the mission you gave me due to the riots in the UK. It’s taken some time to install the TV and cinema surround system that I just got, thanks be to God. I would like you to explain the ‘bear in the alley’ comment. Bears are not native to the UK, so should I look out for another carnivorous animal?

The bear in the alley is when one needs to be convince with more than just words.What mission of any kind are you referring to?You will have to refresh my memory. It is good to have you back.

I can’t mention the mission here Jack! By the way, I’ve come to a conclusion about your real identity, using an intricate system of algebra and tea leaf reading, and I would like to reveal it here – you are Pope Benedict aren’t you?

I am one that the world did not know about….and didn’t see coming [no shit!].

So you are Pope Benedict then ‘Jack’? I knew it! No-one else could have such wisdom. What are the next steps towards the end of the world?

What is your next step in life?What do you need or have to do?

Next step in my life is to buy milk. But since that every shop in my town is shut early due to London rioters, it has become a challenge and a task.

My next step is to steer clear of the apostle sorry but you are a bit heavy, you must have one great burden on your shoulders

All is invited to the feast of God..but all will not come.I my self stay clear of a lot of people because we don’t connect.But there is a lot of others that I do connect with.The majority of the world will not be save nor carry the torch of victory.It is only the few of the world that will enter heaven.So I am not moved by your distant ways.The burden is light and the yoke has been broken.The burden is only heavy…when one is confused.
I speak only with confidence.

Tell me more about this feast. You mention that the yoke has been broken – are omelettes on the menu? When and where is it being held?

Pardon my frequent questions but I’m not as wise and intelligent as you, so I’m easily confused as you probably noticed! In fact, I usually have someone sit with me when I’m online, transcribing from my etch-a-sketch.

The feast is concerning “The marriage Supper of the Lamb” after “Judgment Day”.

The yoke of darkness is broken by the knowledge of God concerning our spiritual existence,which is , and shall take this world beyond beyond [that’s a long way beyond!] scientific equations. It concerns that which have …..NO DNA [are you sure about that?].

Until now complete knowledge have not been presented to humankind.Our Celestial existence is yet for the world to know about.We are spirits within flesh,but only one is known and focus on, and that is the flesh,and the spirit goes to the back burner.
And because of the lack of knowledge concerning our spiritual existence,scientist put the fruit and the meat in one basket……and the whole world was affected.

When is the feast and when is judgement day? I’m free in early September.

apostlejack, do you have an active WordPress.com blog?

@raincoaster……..your interest is welcome,
You must not have read any of my blog “The Last One” here on word press.Some poetry, poems [aren’t they the same?] and philosophy of my experiences of life,and education of hidden knowledge.I have other links if you you [me me?] are so inspired to come and see.
http://www.hubpages.com/profile/Apostle+Jack
http://wwwhubpages.com/hub/lack

Most things in the world seem like a lie, but don’t overlook the apple that did not rotten in the barrel of all the apples in the barrel [huh?!]. I was made his example [you certainly were].

The more we know the more we grow [you love rhyming, are you an MC?].But not everyone shall enter the race.

@tltcl THE FEAST IS SPIRITUAL the effects of it is in to win battles in SPIRITUAL WARFARE.Not t be over come by the negative forces of the world,to do what one have to do at times when he or she have to do it….is a celebration.To be “worry free” is an unnatural thought,but common in spiritual understanding.

What I have just gave you is a view of the present spiritual feast of many of the spirits of humankind.Some will and some won’t,some do and some don’t, [you’re a poet and don’t know it] and some can …and some can’t.

Justin Bieber will release a new album that, when played backwards, will command his followers to rise up and take battle against the non-beliebers. It will be a fight of good vs. evil but, with God’s good grace we can prevail against the satanic Bieber influence.

Either that or we’re all doomed, I’m not sure, could go either way.

I think prophecy of the bible and the time spans of life will have something to say about what shall be and when it shall be.But either way God’s children shall be the victors.

I thought that God only had one child, Jesus. Can you tell me more about his other children? Who were the mothers? I’ve seen stuff like this on Jerry Springer’s show, it’s very upsetting.

In our previous discussions (which I will never make public) you indicated that you believe that Justin Bieber is the devil incarnate, which I concur with. In that case, what can we do to stop the spread of his evil work? I am happy to go beyond Belief to Conformance or anywhere else in France. I’ve driven there before, it’s easy.

You have the right to disbelieve.REWARDS….IS WHAT ITS ALL ABOUT. Different CHOICES…… BRING FORTH DIFFERENT consequences. As we move through life we have decisions to make,and depending on your choice of stability determines your ability and “spiritual strength”.

As the world process,humankind must also increase in intelligence [you first].We have to be MORE than Satan is in order to show a difference.Some will be examples of that separation .Others will remain the same,and some will come and see.

There is one path to God and it is narrow …..but many will find it.
If you judge the book by the cover….you miss the boat [you love mixing metaphors don’t you?].

You talk about missing the boat. Where is this boat going – is it to Concordance?

Sorry Jack, I’m really getting confused! I don’t want to miss the boat, so just tell me the available times and I’ll book it now. Is it P&O or Brittany Ferries?

30% off Brittany Ferries at the moment according to the e-mail I got yesterday so you better hope it’s them!

Who needs a boat? Swim with the dolphins.

Don’t pay any attention to the flippant remarks Apostle Jack. Rise above the non-beliebers. I think it was Ezekiel in the Old Tesament who said: ‘A wise monkey always swings through the tallest trees.’

We can all learn something from that.

Actually, sorry, it was Sir David Attenborough who said that in ‘Planet Earth’, not Ezekiel. But it doesn’t matter, as Attenborough is a noble man of great wisdom.

I mean, nothing against Ezekiel, I’m not really up to speed with his body of work, but I’m sure it’s right up there with Attenborough.

Jack? You still there? Hello…

So that’s it, he’s disappeared. Hopefully banished for ever more…

6 thoughts on “Further Discussions With The Prophet”