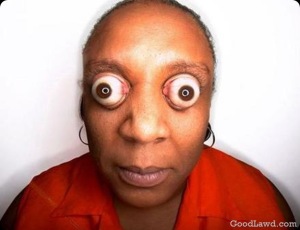 You don't have to look quite
so surprised to see me

So, with a successful blog which is growing in popularity, was it inevitable that one fan would take things too far? ‘Man of the people’, ‘Studmuffin’ and ‘Leader of men’… these are just some of the descriptions that have never been used to describe me. So it was just a tad surprising to find myself the subject of one misguided bunny boiler’s attentions.

She wasn’t aware of this site; we had ‘met’ when I was new to London and had joined City Socialising, a social network for people who are looking to widen their circle of friends. She sent me a couple of messages which, although jangling my internal alarm bells, I replied to out of courtesy. I say courtesy, but her name was Ho, and I wasn’t sure if that was really her name or if it was actually a nickname based on her sexual promiscuity. So in reality, Little Stewie was doing the thinking, thereby overruling the more cautious thoughts that I should have paid more attention to.

Ho asked me out for a drink almost immediately. City Socialising is not a dating site, so it all felt just a little weird. Why would she be so keen to meet me? I finally wrestled control of my thoughts away from Little Stewie and offered a compromise. We should meet at a drinks evening in the coming days. That way I could suss her out in the security of a crowd of people and, if things took a turn for the worse, I could always introduce her to Captain Geek who always seem to turn up at City Socialising evenings and make a quick exit. Job done.

Or so I thought. It turned out that Ho was actually an idiot. On the evening itself she was nowhere to be seen. I had mixed feelings; part relief as I had a terrible sense of foreboding, but part disappointment as I my intrigue was left unsatisfied. Then came a text. Ho had managed to turn up at a different CS event, somehow mistaking it for the event that I was attending, despite the bar that she was in having a different name and it being in a different part of the city. Logical deductions were clearly not Ho’s strength.

Of course, I kept my critical thoughts to myself. “It was an easy mistake. It could have happened to anyone” I told her. Yes, any idiot. I thought that may be the end of it, but the messages kept coming. So I thought that the only way to find out if she was actually unhinged, or genuine and sane, was to meet her in the flesh. Okay, that sounds like I wanted to see her naked… damn Little Stewie again. I made a decision to invite her out to a club that I was going to with two other friends. Again, safety in numbers.

I had given Ho clear instructions of where to meet, in a bar close to the club, where we could chat and drink a little, before entering the club when the atmosphere would be pumping. So naturally, at the arranged meeting time, Ho was nowhere to be seen. Then came a text. Deja vu. She had only gone and ignored my instructions and had entered the club just after it had opened. So she was waiting in a deserted club on her own. Great. What was wrong with her? Unfortunately, one of my friends had yet to appear, so I gave her the bad news. She had to wait another half an hour.

When the time came that I could no longer avoid meeting Ho, I escorted my two friends who, incidently were two girls, into the club. Out of the shadows came a girl who I assumed must be Ho. “Hi Ho” I said. She nodded, but looked at me blankly. “Hi Ho”. It’s off to work we go. Sorry, I couldn’t help it. Again she looked at me and my friends, but this time with a look of shock creeping across her face. “I’m Stewart”. Finally she spoke: “You look so different from your photos”, she said. “Well it is me – that’s how I know your name”. She wouldn’t let it lie. “No really, you could be two different people”. Now I thought that she was being deliberately offensive. It was dark, so surely I didn’t look that bad! And anyway, she was hardly Lucy Liu, more like Loopy Lu. “Well you don’t look like your photo either!” Straight back at ya girl. This wasn’t a proper date anyway, so what was her problem? She didn’t have to look quite so disappointed!

Initial greetings over with, we went to the bar and I bought a round of drinks. My friends attempted to converse with Ho, but she responded with one word answers, clearly not wanting the hassle. Having popped some valium to kill my hypertension (not really), I took up the baton and tried to find some common ground. There wasn’t any. After all, I am against animal cruelty, whilst she was already planning to eat rabbit stew when she got home. Probably. She left after less than an hour, much to my relief, without saying goodbye to my friends. “She was really hard to talk to”, one of my friends exclaimed. True dat.

I don’t know what Ho was expecting of me, but I get the feeling that she’d quite possibly got ahead of herself, having thought through everything from our first meeting (gazing lovingly at each other), to moving in together (hugs and pillow fights), getting married in Westminster Abbey (Prince William and Kate as guests) and living in the countryside with 2.4 children. But no pets of course… It wasn’t even a date I tell you!

10 thoughts on “My First Stalker”