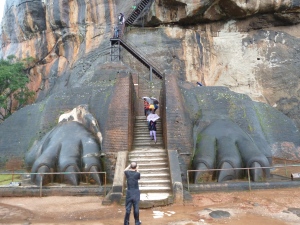 The Lion Entrance at Sigirya Rock

Julia, my new travel buddy, and I continued our sodden tour across Sri Lanka’s ‘cultural triangle’ with a visit to the 1st Century BC rock caves at Dambulla and then Sigirya, an expected highlight of the trip. We witnessed the floods from our bus and then via a tuktuk that was on its last legs. Or maybe that should be last wheels… Whatever, it let the rain in, wouldn’t change gear unless the driver used two hands (!) and had a manual windscreen wiper. Surprisingly it made the journey intact and we took advantage of a break in the rain to climb the 1500+ steps to the summit of Sigirya rock. Unfortunately it started to rain again as we approached the first steps; the rain water cascading down the steps in a waterfall. Let’s get wet again then… It wasn’t as tough as I thought it would be, and the rain clouds cleared when we were at the top, allowing us uninterrupted views of the semi-ruined citadel and surrounding countryside. Definitely worth the visit.

The next day the incessant rain had finally ceased and we headed to the ancient capital of Anuradhapura, via another ruined city at Polonaruwa. As soon as we got on the bus, an over-friendly local man moved to sit next to us. His limited English vocabulary was no limitation in his opinion as he attempted to converse with us from three inches away. In between incomprehensible sentences, he seemed to be attempting to communicate through the power of thought, intently staring at us, whilst occasionally stoking Julia’s arm, even though we had said that we were married. Once I’d switched places with Julia, for fear of her being hypnotised in his sinister stare, he soon took my hand, muttering “My job is massage.” 30 seconds later my arm felt dead. Oh no, he’s performed some kind of voodoo massage on me, I thought. I quickly waved him to stop with my good arm and he briefly seemed to calm down… Until sometime later he gave me a firm, very firm, upper body massage that drew bewildered stares from other passengers. What, you mean that this isn’t normal behaviour on a bus in Sri Lanka? When I could take no more, I told him to stop and turned around to see that he was sweating like a racehorse. Was it through excitement or exertion? Or both? Ugh, that memory will stay with me forever.

After giving him a nominal amount for services received, and politely declining his “Full body?” offer, we alighted at our stop, with the ‘masseur’ following swiftly. “I will come to your hotel.” No you won’t. “Give me more money.” His stare was unflinching now. I managed to hail a tuktuk from heaven and bundled my case in. Drive! It pulled forward a few inches and stalled. Noooooooo! He’s still with us, demanding money. Finally we made our getaway, admittedly with a driver who spoke no English and didn’t know where he was going, but at least we were safe.

Anuradhapura is divided into two parts: a sacred ‘old town’ comprising ancient ruins and the Bodhi Tree, the world’s oldest documented tree apparently. “It’s not very big. I thought it would be bigger” said Julia disappointedly. Who says that size doesn’t matter to a girl? The ‘new town’ is easily the most dilapidated town that I’ve visited in Sri Lanka; it looks like it belongs in India.

The next day we took the long train ride to Colombo, giving us one final chance to endure the misinformation, uncomfortable seats, filthy carriages, and annoying men selling all sorts of snacks, one of which is known as waddee or something similar. “Waddeeeeeee! Waddeewaddeewaddeewaddeewaddeeeeeee!” was the constant refrain, every few minutes. Colombo is completely different from every other town in Sri Lanka, as it’s a sprawling metropolis which is snobily looked down on by most travellers. I’m not sure why, as it’s clean, has a few notable sights and a pleasant beachside area where we stayed, named Mount Lavinia. It also has a pub known as the Lion that you enter through a lion’s mouth. In my book, that rocks!

The next day I said goodbye to Julia after 6 days or so. It had been a blast, but now we had to go separate ways. I took one last train ride to my final destination of Negombo for some relaxation by the beach. Under clouds. But at least it wasn’t raining. Away from the beach area, Negombo is a rather ramshackle town, with large fish markets and many colonial style churches dotted around. It also has the highest number of beggars that I  have encountered, even though many of them appear to be far from destitute!

Well, I’ve had a great time in Sri Lanka, despite the weather for the last week. I will miss the stunning scenery, friendly people and cultural heritage. I won’t miss the trains (slower than a tortoise on ice),  psychotic bus drivers and minority of dodgy con men. Plus it will be nice not to be stared at quite as much…