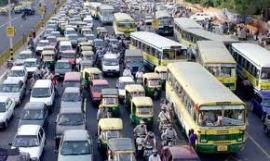 So I finally packed up my stuff and put it into storage as I embark on my sabbatical. Well deserved time off work in my biased opinion! But not before being ripped off my a Heathrow airport taxi driver on the way to my overnight hotel stay and early morning flight. He even had the nerve to short change me and then claim that he didn’t have any change! I went mental, to put it bluntly! No-one messes with Stewie… Unless I’m in a foreign country and don’t notice, of course. Lots of people do that.

After a seemingly endless flight via Doha, the last thing that my sore eyes needed to see was the truly hideous carpet that welcomes passengers to Delhi airport. It looks like one of those Magic Eye pictures stretching into the distance and I wasn’t sure if I was supposed to be seeing 3D images popping out from ‘beyond’ the yellow and brown shapes. When I finally made it to my hotel I realised that I may not have chosen wisely. The bed was too small for my height and an annoying buzzing sound emanating from the lighting outside was so loud that it was like trying to sleep with a hornet burrowing into my eardrum. Oh, and the driving is as bad as everyone says… much overuse of the horn and either a ‘kill or be killed’ or ‘look the other way and hope for the best’ driving mentality. 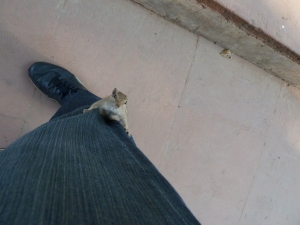 Look at the eyes man, it means business

After a few hours sleep I hired a tuktuk and wearily took in some of Delhi’s sights, including the Red Fort, where I was attacked by some kind of rodent with wicked intent in its eyes. Then my driver decided to take me on a magical mystery tour on foot to see the Jama Masjid mosque. I say ‘mystery’ as he didn’t seem to know where he was going and had to ask for directions, as we traipsed through a market/rubbish tip/place where homeless people sleep, tragically including many children. I felt slightly conspicuous there, I have to say… I finished the day by visiting the fabulous Akshardham Temple: 10 rupees for Indians, 250 for foreigners. Well, at least they are honest. Security was tight with the usual banned items listed at the entrance: calculator (bit strange) cameras (that’s a bit tight), weapons (I concur!), nuts (sexist), shampoo (huh?). After that, I went for food at the new retail complex Connaught Place. It’ll be nice when its finished.

The next day I hired a psychopath to drive me to Agra to see the Taj Mahal (20 rupees for Indians, 750 for foreigners!), a 200 Km trip that takes 4.5 hours. That’s if you make there alive. My psychopath didn’t just embrace the kill or be killed philosophy, he wrote the instruction manual. In his own blood. Probably. He enjoyed driving straight at vulnerable road users with his full beam switched on and, bizarrely, turning his lights off and then on again every so often. Presumably he thought it would be fun to pull up behind cars without their drivers knowing, before blinding them with the full beam. Safety first.

At the Taj Mahal, my guide asked me the usual questions that I expected: where are you from, do you have a girlfriend, how often a month do you need sex? What was that? Er… And things were going so well. I have to say that I expected more from the Taj Mahal, although as something that was built for the Taj’s true love, it is definitely a majestic erection, so-to-speak. Any man would be proud of it. Next I was taken ‘shopping’: a trip to see how the marble in the Taj Mahal is decorated followed by hard selling with no escape route. As if I would buckle under the pressure! Okay, I did buy a small elephant, but it was good value. Possibly.

Finally, I visited the Agra Fort; another red sandstone fortification, similar to the Red Fort in Delhi. But no angry rodents, thankfully. I thought I spied an animal lying on the road. It was big, but not large enough to be a cow. What was it? “Crazy man!” said my psychopath. Is that what you call it? It was shocking – is that the value that life has in India? Mind you, he was going too fast to stop anyway. I left my psychopath with a good tip for getting me home safely and the imprint of my shoe on the car floor, caused by my instinctive ‘braking’ reflex. He really did brake late…

On the third night I succumbed to ‘Delhi Belly’ and spent the night gently rocking in my bed. At least I forced myself to check out a few more sights the next day, including India Gate and Humayun’s Tomb which are must-see on a visit to Delhi. Plus I took in the Hindu Lakshmi Narayan Temple and Sikh Gurudwara Bangla Sahib temple. Because I like to share the love with all religions. I had to wear a bandana at the Sikh temple. Not a good look!

I will leave you with this shot of a hotel nearby to where I was staying. Made me laugh. Repeatedly. 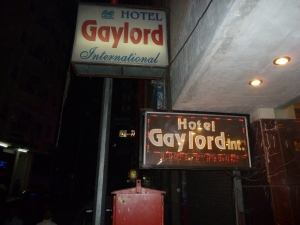 Enter at the rear